In Hamburg there is a quite vibrant scene of blind and visually-impaired people, most prominently gathered in the BSVH, the society of blind and visually-impaired people Hamburg.The activities of the BSVH are targeted at community building through joint activities, public awareness through the distribution of information, and policy advocacy through giving advice and comments to policy makers. The society gathers relevant  news, publishes the newsletter "Augenblick Mail" and its own press releases and twitter feed, has an event calender and provides information about sight-related illnesses and where to get help in Hamburg. Once a month there is the BSVH-Treff, a two-hour talk session aired by the Hamburg local radio station, that is available as podcast as well.

Heiko Kunert, the current public relation officer and designated manager general from 2012 on, is the most visible beacon of the active community members. He runs the blog Blind-PR where he comments on current developments of assistive technology, public policies and a diversity of issues adjacent to the needs and rights of people with special needs. Heiko supported different media in reporting about aspects of living with visual impairements, for example, in "DIGIsellschaft" for ZDF Elektrischer Reporter or in "Mein Leben als Blinder" for Pro7 Galileo.
Posted by Christian Graf at 11:18 AM No comments:

Ken Forbus talked about "Sketching our way to human-level AI"

On Tuesday, Ken Forbus from the Northwestern University gave a talk "Sketching our way to human-level AI" as part of his 3-day visit to the SFB/TR 8 Spatial Cognition research group at the University of Bremen: 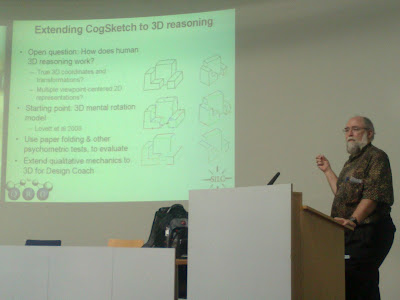 For me, the talk was highly interesting as it opened up a perspective how to analyse sketches of maps in a conceptual way. Other pictures are available here

In a personal conversation one day later, Ken took the time and discussed with me how I could use CogSketch in my research. This approach allows to compare sketches and helps to segment them into the basic conceptually entities. The algorithms and knowledge base behind CogSketch allow to compute a similarity value on the ground of spatial properties, for example, the directional relations of entities, their neighbourhood, the containment etc. CogSketch is really amazing and I will definitely give a try!

Thank you Ken for your time and your advice and please continue with your collaborators to provide such great tools like CogSketch!
Posted by Christian Graf at 11:53 AM No comments:

Conferences on Tactile Maps or Cognitive Issues of Navigation

Recently, the 1st European State of the Map Conference of the OpenStreetMap project took place in Vienna, Austria. Participants from various countries were present and listened to a bunch of interesting talks. In the context of my research, the talk by Annette Thurow on OSM for blind users was particularly insightful. How to make customized maps from OSM data with Maperitive was demonstrated as well. All recordings of the presentations and conference proceedings (PDF) are available.

Posted by Christian Graf at 10:33 AM No comments: