Writing a thesis on multiple computers

While researching about the principles of constructing tactile orientation maps (semi)automatically I have built my own data storage infrastructure that synchronizes my files and data to multiple computers.  The background is that I work from different sites with different computers, some of which are always online, some of them at least partially offline (for example when I ride the train).

First, I installed Zotero, the reference gathering and management tool, as extension to Firefox. The reference data and some files attached to references are stored locally on the computer such that one can work offline. Originally intended for installation on a single computer Zotero can be tweaked to work on multiple computers (each one has to be assigned a unique ID via the Firefox configuration), such that all synchronize with the same reference collection and the same file storage. I originally used the GMX MediaCenter as WebDAV backend for file storage which worked fine until recently. In April 2012 there was some unannouced change in the GMX policies that restrict folder sizes to 1000 files (see this help page). As Zotero stores all file attachments non-hierachically in one folder and as each attachment has an additional property file this restriction means that you can only store 500 attachments. My collection of references has well above 1000 items, thus GMX MediaCenter does not work for me anymore. I am in search of a replacement offering at least 3GB of storage over WebDAV. I tried Microsoft Skydrive (7GB but no WebDAV) and T-Online Mediencenter (25GB but no WebDAV) as storage provider and SME Storage as WebDAV interface to these providers and my own FTP server. But I haven't found a working solution yet even if there are great website to compare cloud storage solutions (often other solutions have the 1000 files limit as well or a transfer limit of less than 2GB). If someone knows one for not more than 50Euros/year, please point me to that solution!

Working on my thesis, I found that the cloud storage services Dropbox and Wuala are pretty useful when you work at different places with different computers. I particularly like Wuala. It is a European service, offers real client-side encryption and a non-hierarchical embedding of sync-folders into the local file system. Even if encrypted in the cloud most services suffer from some security issues as the recent report "On the Security of Cloud Storage Services" (in German) by the Fraunhofer SIT turned up. I would like to have my data on my own server, but this will be done only after I have finished my thesis. Then I will setup some own WebDAV server that can hold my attachments of my Zotero library, all my photos etc. that are now distributed over different cloud services.

Having worked on a heterogenous infrastructure in the past including different operation systems (Windows, MacOS) and different word processors (Word, OpenOffice, LaTeX), I needed some tool to convert from DOC and RTF files including tables and figures to TeX files. This page about free and commercial coverters on TUG.org helped my a lot.
Posted by Christian Graf at 9:24 AM 5 comments:

In a comment to my business blog, mprove pointed me to the cover of Bill Buxton's book 'Sketching User Experiences'. It shows a close-up of some physical artefact that is not discernable at first glance. On page 36 you can find the explanation what it is: it's a map made of wood showing some coastal region which was used by the Inuit people to navigate along the shores of Canada and Greenland (see the picture below) 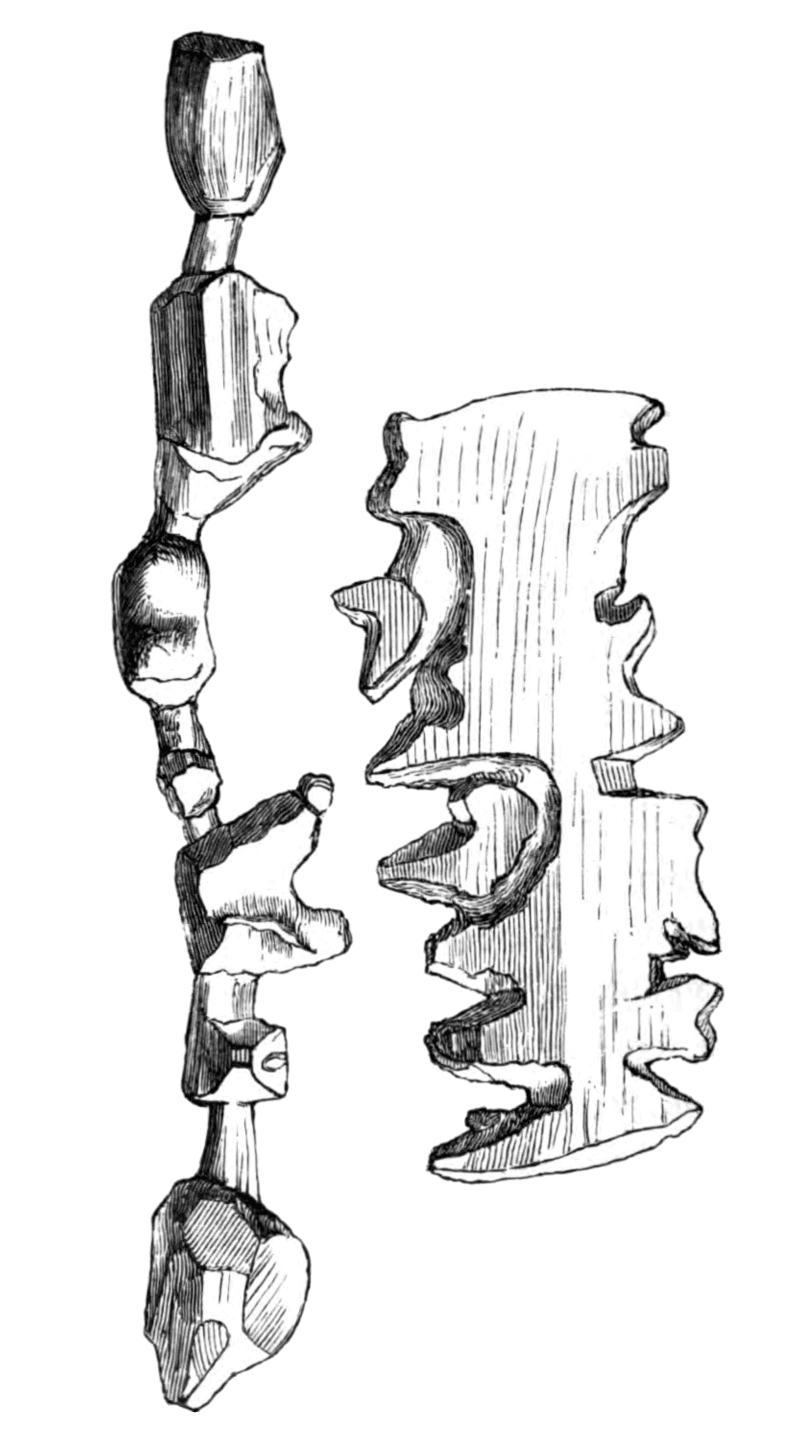 Helen Knight writing for New Scientist, Magazine issue 2862, reports about a new navigation device for blind people in the article "Robot Sensing and Smartphones to Help Blind Navigate". It was presented in the talk "Intelligent Glasses? Visuo-tactile Assistance for Visually Impaired Interaction" at the MIT: "Edwige Pissaloux and colleagues at Pierre and Marie Curie University's Institute of Intelligent Systems and Robotics (ISIR) have developed technology that could eventually let blind users navigate their surroundings without assistance. The system features glasses outfitted with cameras and sensors like those employed in robot exploration, and it generates a three-dimensional map of the user's environment and their position in it, which is continuously updated and displayed on a handheld electronic Braille device. The system produces nearly 10 maps each second, which are transmitted to the Braille device and displayed as a dynamic tactile map. Pissaloux says the Braille map's update speed is sufficient for a visually impaired wearer to navigate an area at walking speed." read more

As much as I welcome the development of new technology in the mobility area for visually disabled I really wonder how low-tech these gadgets seem to be in terms of cognitive consideration put into the development. This particular work is developed in the robotics domain and uses advances computer vision techniques to determine what to display on a small Braille pad - so one might understand that it is technology focussed. From that aspect this project is interesting as it employs shape memory alloy to bring the tactual entities into being (I could not varify if the result is a continous surface or a rather discrete surface). But given that the Braille pad should be used by blind people, their specific cognitive abilities should be under consideration when developing assistive technology.

In this regard other approaches fall short as well: In the BMWi funded project Hyperbraille a pin-matrix display has been developed that works as a composition of hundrets of electro-mechanical piezo benders which raise the pins to form one sampled, discrete image. Some years ago, there was a NSF funded project at John Hopkins University (2007-2009) advancing a dynamic electronic surface (on a polymer basis as well), but the development seems to have ceased. The EU-project NOMS (2010-2013) works on electroactive polymers hydraulics to promote materials & new production technologies for the interaction with a discrete surface (see articles in Wired and Scientific America). Other projects care about navigation support for the blind, but are not primarily focussed on technology: ENABLED (2004-2007), HAPTIMAP (2008-2012) and Nav4Blind - all of them are interrelated. Other technologies like laser lithography might become interesting once established for home use and the production of appropriate sized objects.

Displaying an image as tactile version on a Braille pad does not necessarily mean that the users understand that representation of the world. What catched my attention in this regard is the design decission to generate a 3d representation on the tactile pad. What for? Unfortunately nothing is said about this aspect in the article and there is no other material available about the project. Most blind people I spoke to were not interested in the heights of buildings. In some cases the inclination of the pavement might be interesting to orientate oneself. But I doubt that any tactile display listed above is able to represent this, let alone the ability to read thus information of these displays. In general, the abstractions must be understandable, i.e. matching the cognitive abilities and the specialities of tactile processing. That is what my PhD project is aiming for: cognitively-adequate tactile orientation maps.

The initially mentioned ISIR at the Université Pierre et Marie Curie is consortium member in the EU-project Assistive Technology Rapid Integration & Construction Set (AsTeRICS) as well. It hosts a group on interaction and describes itself as being involved in cognitive science. Unfortunately this expertise seems to be underrepresented in the current work. ISIR might have the opportunity to push cognitive consideration in the project the institute is involved in. But the same seems to be true for most EU-projects in the 7th framework: they are technology driven and put cognitive consideration as an optional add-on at the end of the development cycle. I think we can learn from Human-Computer-Interaction here: Until approx. the 1980th most development was technology driven (then the success of the Mac brought good design and usability to the attention of people). From the 1990th usability was considered a major factor of the customers' acceptance and 15 years later the even wider concept of user experience had settled in the minds of designers, developers and marketeers. The focus has shifted from technology to human-centred functionality to personality. In the domain of tactile displays we are now in the phase of technology-focussed development. Some people will realize that there must be a shift towards human-centred and cognitive aspects as people won't accept (and will not buy) technology without these considerations taken into account.

Note: see also my recent post on Developments in Tactile Interfaces
Posted by Christian Graf at 11:22 PM No comments: